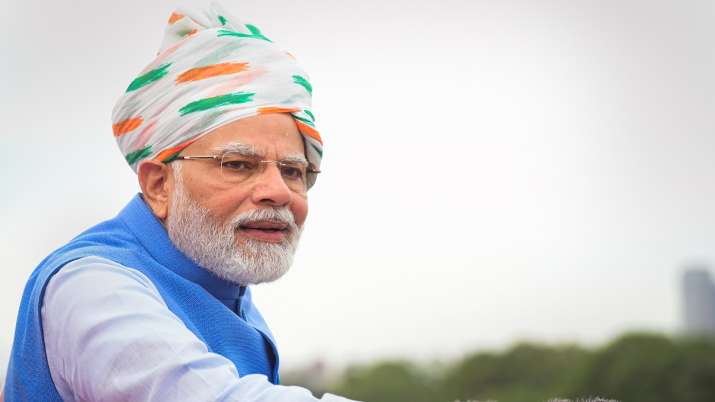 Independence Day 2022: Prime Minister Narendra Modi addressed the nation on the occasion of the 76th Independence Day on Monday. Speaking from the ramparts of the Red Fort, Prime Minister Modi today said the completion of 75 years of independence was a time to step in a new direction with new determination. The Prime Minister paid tribute to a galaxy of freedom fighters including Mahatma Gandhi, Netaji Subhas Chandra Bose, Babasaheb Ambedkar, Veer Savarkar, Bhagat Singh, Jawaharlal Nehru among others.

“During our struggle for freedom, there has not been a year that our freedom fighters have not faced brutality and cruelty. Today is the day that, as we give back to them tribute, we must remember their vision and their dream for India,” Modi said.

Prime Minister Modi also said in this ‘Amrit Kaal’, that every Indian yearns to see the rapid progress of a new India with enthusiasm and anticipation.

“Our nation has proven that we have inherent strength in our diversity and the common thread of patriotism makes India unshakeable,” Modi said.

An ambitious society is important for any nation. Today, “we are proud that these aspirations are present in every home in India. Every citizen is enthusiastic, looking forward to the rapid progress of the New India,” he said.

Modi praises people for coming together to fight against COVID-19

Prime Minister Modi said today that India administered a record 200 crore vaccine doses in a limited time frame, a feat that would not have been possible for any other country. He praised the country for standing together in the fight against the coronavirus pandemic.

There has been a rise in the common consciousness of love for the nation, Prime Minister Modi said during his Independence Day speech from the ramparts of the historic Red Fort today.

The fight against COVID-19 was an example of this common consciousness where citizens came together, he said.

Prime Minister Modi also urged people to focus their energy on the five resolutions aimed at making India a developed nation, eliminating all traces of bondage, being proud of its heritage and unity and fulfilling their duties over the next 25 years.

“By the 100th anniversary of independence, we must work with the vision of achieving what our freedom fighters dreamed of,” he said addressing the nation.

Modi said India will have to push forward with big goals to realize the vision of a developed India on the centenary of its independence.

“In the next 25 years, we must focus on the five resolutions – to develop India, to remove every trace of bondage from our minds, to be proud of our glorious heritage and unity, and to fulfill our duties,” a- he declared.

Prime Minister Modi also said that tribal freedom fighters like Birsa Munda are keeping the struggle for independence alive in all corners of the country.

Addressing the nation from the ramparts of the Red Fort on the 76th Independence Day, Modi said the role of tribals in the struggle for freedom could not be forgotten.

“Tribal freedom fighters such as Birsa Munda, Tirot Singh and Alluri Sitarama Raju have played pivotal roles in sustaining the freedom struggle in every corner of India,” he said.

Speaking on the importance of a united nation, Modi said India has a lot to teach the world about the concept of unity which starts with family structure.

Nepotism and corruption two major challenges for the country

Prime Minister Narendra Modi said today that the two big challenges facing the country are nepotism and dynasty, and corruption, saying “we must fight” these together.

Addressing the nation, Modi described nepotism as “evil” and said the country must unite against it.

“We must give opportunities to those who have talent and who will work for the progress of the nation. Talent will be the basis of the New India,” he said.

“When I talk about nepotism and dynasty, people think I am only talking about politics. No, unfortunately this evil of politics has fed nepotism in all institutions,” Modi said.

He added that to purify every institute in India, opportunities should be given to deserving people.

“We must unite as a society to punish those who have spread the evil of corruption,” he added.

Modi further said that the nation was showing “anger against corruption, but not against the corrupt”.

“Until people have the mentality of penalizing the corrupt, the nation cannot progress at an optimum pace,” he said.

Urging the country’s citizens to pledge to do nothing that undermines the dignity of women, the Prime Minister said today that a mentality of insulting them in speech and conduct has crept in.

The Prime Minister also said respect for women is an important pillar of India’s growth and stressed the need to expand support for ‘Nari Shakti’.

“A distortion has crept into our conduct and we sometimes insult women,” he said, and asked, “Can we commit to getting rid of that in our behavior and values?”

It is important that in speech and conduct “we do not do anything that lowers the dignity of women”, he said.

Minister of Women and Child Development Smriti Irani praised the prime minister’s “sensitivity” on the issue in a tweet.

Prime Minister Modi also touched on various other topics including the public response to the “Har Ghar Tiranga” campaign, the launch of 5G mobile services in India, unity in diversity in India, global warming and others. environmental problems.

2022-08-15
Previous Post: Three in five people in the UK support public ownership of public services, report finds
Next Post: Without the support of the people, there will be no consensus on the crime